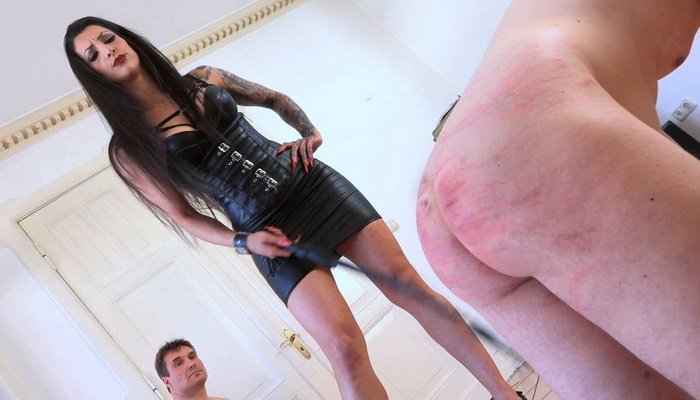 domina charlize has some new whips. time to check them on their slaves. quite simple story, lots of pain for the slaves ahead. already armed with a vicious stock whip she first wants to look for the right distance starting to whip the back of the slave where bright red welts already spring off. time to beat the other slave who gets this painful whip on his ass. she looks for another whip now, a short big single tail and continue with the whipping on the ass. then the slave has to turn around and gets vicious strokes on his nipples. “not so hard it is slave or?” “no mistress, its really hard and painful” and to proove it she really swings the whip through smiling at her victim by thrashing his nipples hard. next both slaves has to present their asses. tight together and now both slaves are whipped hard at the same time. to make it more painful she takes out another single tail, but this one is more heavy and more painful. at least a brown snake whip is applied without any mercy, but the mistress isnt satisfied. she wants to inflict more pain so she uses her cruel nails and fingers to twist the nipples of their slaves until they cry

Corporal Punishment and Hard Whipping in Red with Mistress Akella

Extreme Corporal Punishment, My Whip Will Make You Singing with Mistress Ezada